No Condo Glut: Beware of Data

As we saw this week,  a spike in unsold newly completed condos can make for big headlines and raise concerns all over North America.

The data reported by CMHC showed that the stock of unabsorbed condos jumped by 816 units, or 41%, in one month! If this were true, the number of new units belonging to no one but the developer who built them would be at an all-time high -- even higher than during the crash of the early 90s when buyers were walking away from their units and projects pre-sold far fewer units than they do today. 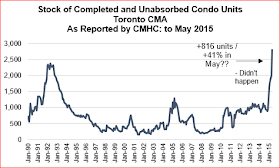 According to CMHC, only 69% of the condo units completed in May were absorbed, representing the first time the absorption rate was less than 89% in five years (aside from an outlier in Aug 2013). Urbanation tracks pre-sale activity in every project in development, and we haven't seen absorptions for occupying condos at less than 90% since the recessionary period in 2009. So naturally, we felt the need to investigate and were able pinpoint the issue using CMHC's Housing Market Information Portal.

A glut in Regent Park?

We found that just over half of the condos reported as being completed during May were in the core, most of which in the Regent Park neighbourhood -- 785 units to be exact -- 781 units of which in the Dundas-Queen-Parliament-DVP quadrant according to CMHC. 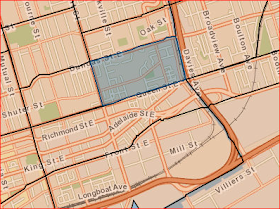 Where are these projects?

Two very puzzling things struck us. First, as of the end of our March 2015 survey, there were no projects under construction in this location -- so how could there be 781 completions in May? Well, part of that total most likely included Daniels' One Park Place South building that began occupancy in December 2014 according to our data. For more on the issue of the reported timing of completions see our previous blogpost: http://urbanationinc.blogspot.ca/2015/03/wondering-how-recent-spike-in-condo.html.

But One Park Place South only accounts for 415 units. What about the other 366 units reported as completed in May? Could it have been One Park Place North (363 units) - the previous project to complete in the area? Hard to fathom as this building was completed and registered as of March 2014. Could it have included non-market units apart of Regent park's social housing replacement supply? We don't track such units in our survey, but neither is CMHC in their survey.

The even more surprising finding was that CMHC counted all 781 of these units as being 0% absorbed at completion! Meaning the entire 781 units were added to their stock estimate of completed an unabsorbed condos in May -- so this is where that jump of 816 units came from. But according to our data, One Park Place South was 90% sold at the end of March with just 41 unsold units. One Park Place North was completely absorbed.

So not only were completions overstated for the month, absorptions weren't reported.

We understand that CMHC has a set of criteria that their survey staff must adhere to before confirming absorptions. And since they tally absorptions at the time of completion, sometimes that information can't be confirmed in time for reporting, resulting in a default zero value.  But it doesn't mean that the confirmation won't come next month and the number of unabsorbed units will reverse -- in fact that is what is most likely to happen in June.

The Bottom Line: As more units continue to come to completion in the months ahead, this is likely to happen again. So, don't pay attention to big swings in absorption data reported by CMHC month-to-month -- look at the trend. Better yet, look at Urbanation's data on unabsorbed units -- we monitor absorptions continuously throughout the project lifecycle, reporting inventory at every stage of development from information provided directly by the developer, their sales staff and first-hand sales centre visits. At the end of March we counted 1,648 unsold completed units -- a couple hundred units less than CMHC at the time before this big jump occurred.

What's more important is that whether the number is 1,648 or 2,803, it doesn't mean as much as it did 25 years ago when the overall market was only a quarter of the size it is today. In the early 90s, standing inventory represented 3% of the entire stock. Today, it's less than 1%. For further context, as of the fall of 2014 there were nearly 1,200 condos for rent sitting vacant and that was equal to only a 1.3% vacancy rate! So the absolute number isn't as important as its relationship to the level of demand.